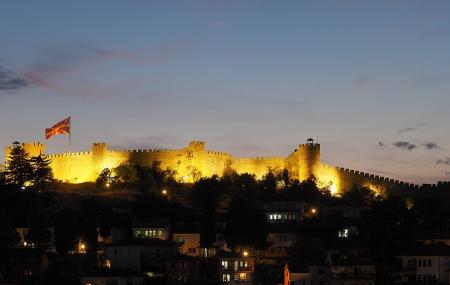 The Tsar Samuel's Fortress is located in the old town of Ohrid city. The fortress is named after Samuil who is considered to be the most successful ruler of Macedonia during the Middle ages. In the 10th century, Ohrid city was the capital of the first Bulgarian Empire and archaeologists believe that the present-day fortifications were actually built on older ones that date back to the 4th century. There are mentions of the fortress that date back to as early as the 5th century as well.

The fortress was built on one of the best vantage points that you can see around Ohrid with the lake on one side and was protected by massive defensive wall. What’s interesting about the fortress is that even though it was reconstructed multiple times under the rule of multiple emperors, you can still find influences of all its historic rulers that indicate that the fort was used by the Romans, the Byzantines, the Slavs and Ottoman Turks. The town that was guarded by these fortification has three main gates- only the upper gate of these 3 has tombs made from marble that has Greek and Roman inscriptions. After Samuil’s reign collapsed he moved to another palace and since 1830 up until 2000, the place was in ruins. It was in 2000 that restoration began and today you can actually walk through the fortress – taking in its history, its fool proof construction and its ambience. After dark, the exterior walls are illuminated with yellow lights and along with Macedonia’s flag hoisted on the fort, it forms a breath-taking view after sunset!

How to Reach Tsar Samuels Fortress

Are you associated with this business? Get in Touch
Thursday and Friday

People normally club together Church Of St. John At Kaneo and Holy Mary Perybleptos while planning their visit to Tsar Samuels Fortress.