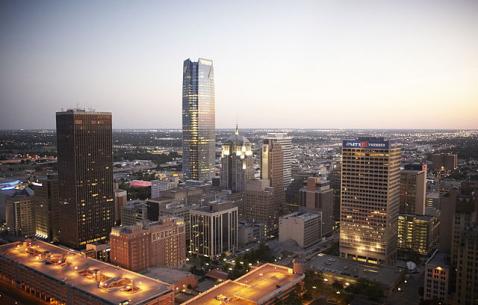 Oklahoma City is the largest city of Oklahoma State, with a population of about 610000. It was famously founded during Land Run of 1889, when the population of the city jumped to 10,000 within a short time of its founding. Its late founding is one of the reasons that Oklahoma City hasn't got much to see historically. In fact, outside of the land run monument and the cowboy culture in the historic Stockyards District, the city's most famous tourism destination is actually based in the greatest recent tragedy of its past.

In 1995, the city saw a heinous bomb attack in which a hundred and sixty-five people were killed. The city Memorial that commemorates this attack is the most visited tourist attraction. Visitors will find most of the attractions of the city are located in Bricktown and downtown. Green spaces-wise, the best places to visit are the Botanical Gardens and Zoo and the Myriad Gardens urban park. The Paseo arts district is an extremely charming place and you can spend hours checking out the art galleries. The Asian district has some excellent Vietnamese restaurants. Definitely check out the Capitol building, which is the only capitol in the United States with an active oil well under its land. The Stockyards historical district is a bit like an amusement park but without the paid rides – you won’t need a travel guide to take your around either.

Nightlife and shopping are pretty decent around here. The antique co-op brings together the collected antiques of 70 different dealers. The outlet shoppers area has about 90 stores where you can get massively discounted products of brand clothing. There are some excellent bars and pubs all over the city. Just don't go expecting Vegas or something.

Essential travel information and Oklahoma City tips for your visit

Tipping: 15% for all services.

Plan Your Trip To Oklahoma City

The best tours and activities in the city, guided by experts to give you a local insight to the best of Oklahoma City