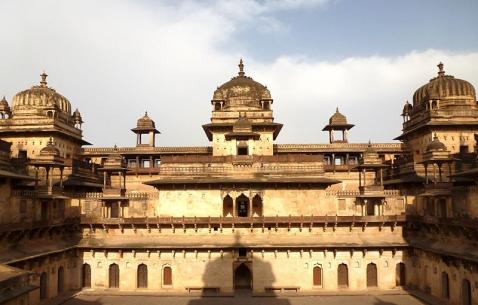 One of the most resplendent points of Madhya Pradesh tourism, Orchha inspires much imagination and awe. Located on the banks of the Betwa River, Orchha was founded by Maharaja Rudra Pratap Singh in the year 1501 and has bewitched tourists ever since then owing to its many attractions. Surrounded by the battemented wall, and approached by a causeway over a fine bridge of fourteen arches, stands a huge palace fort by Maharaja Bir Singh Dev which is one of the pivotal attractions of Orchha. There are beautiful monuments, stunning palaces and magnificent structures that offer a range of experiences to people who visit it. Geographically, the town is strategically placed as the river Betwa splits into seven channels, also called the Satdhara. From fascinating temples to palaces that take you back in time, this city offers you glimpse of past peeping through modernity.

And when architecture ceases to cast a spell, there are vast pastoral landscapes to draw you towards nature. Endowed with a laid back vibe, Orchha seems to be like a time travel experience away from the bustling chaos of the metropolis. Orchha literally means a “hidden place” and after a visit to this place, you will definitely feel as if you have discovered one of the hidden gems of India. This “hidden” city is also known for its world class mural paintings. Apart from historical structure that spell a magic, Orchha is also populated with a number of temples such as Raja Ram Temple, Chaturbhuj temple, and Laxmi Narayan Temple that offer you a spiritual grace and insight.

Essential travel information and Orachha tips for your visit

Internet : 3G, Wi-Fi connections are available in almost all the hotels in the city.