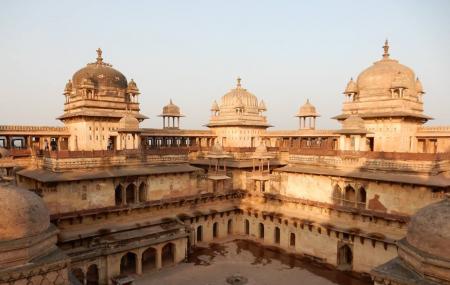 This is an impressive fort complex in Orchha that symbolises the beauty and grandeur of this capital of former princely state of Bundelkhand. Presenting fantastic architectural styles through its series of palaces, buildings, gardens and temples, Orchha Fort complex deserves at least a half-day’s visit.

Constructed on the island formed by the confluence of two major rivers-Betwa and Jamni, the first thing that will strike you on your visit is its impressive approach through arched bridges set in granite stones. The decorated windows, well-planned open-spaces and projected balconies are some of the striking features you can observe within all the structures of the fort. Dating back to 1502 AD, the foundation of the fort complex is attributed to Rudra Pratap Singh, the Budnela Rajput. Several succeeding Maharajas of the state contributed to addition of the various buildings within the fort.

Home to some of the most beautiful attractions of Madhya Pradesh, the Orchha Fort Complex can be explored on foot and preferably with a guide.

Various buildings within the complex include:

Raja Mahal: The residence of the Queen and King till 1783, dotted with beautiful mural paintings and intricate decorations. Home to several secret passage ways, ask the local guide to open the walk you through. The light show in the evening is a must-attend!

Ram Raja Mandir: A part of Raja Mahal converted into a temple of Ram. The speciality of the temple is that it is not dedicated to Lord Ram, but the great king that he was; built by Queen Ganesh Kunwari.

How to Reach Orchha Palace

Love this? Explore the entire list of places to visit in Orachha before you plan your trip.

Fancy a good night's sleep after a tiring day? Check out where to stay in Orachha and book an accommodation of your choice.