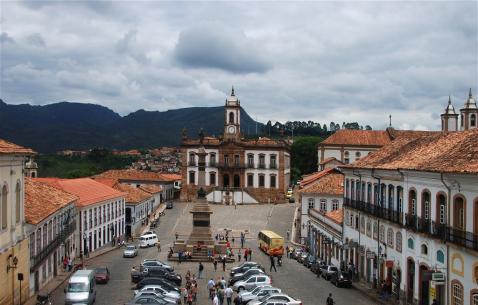 The city's name literally translates into Black Gold. This is not a reference to oil; rather it refers to the colored slaves that were brought over here from Africa to mine the depths of the earth for gold.

Founded in the 17th century, the historic town of Ouro Preto was originally called Vila Rica, or 'Rich Village''. Its entire history is centered on Brazil's 18th century gold rush. The intelligentsia, philosophers and artists and architects alike, were drawn to the city for this reason. In the late 18th century there was a revolution led by a man called Tiradentes, who tried to gain the state's freedom from Portugal. Though the revolution failed the man is now honored in the city, and the Tiradentes Day national holiday is named after him.

Thus, tourism in the city is centered mostly on Ouro Preto's Colonial heritage and mining heritage. For example, one of the foremost tourist attractions in the city is the School of Mines Mineralogical museum, which is one of the largest collections of minerals in the world. And there are also several old legendary mines that you can visit. While the entire town is full of architecturally intriguing colonial buildings, the real monuments are the circuit of churches - baroque & Rococo - lavishly gilded and decorated by some of Brazil's master colonial architects. Furthermore, the region around the city is very scenic. You must visit the Itacolomi State Park, which has excellent hiking trails. For nightlife, shopping, and souvenir hunting visit Rua Conde de Bobadela.

They are also places you can visit around Ouro Preto - The baroque colonial town of Marianas, and the Bom Jesus do Matosinhos sanctuary in the city of Congonhas.

Essential travel information and Ouro Preto tips for your visit