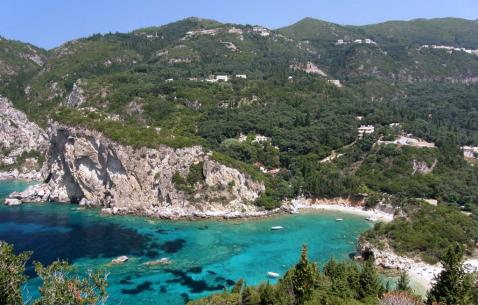 Greece is a lovely country to be in. Corfu Town stands out for its amazing cuisine which distinctly differs from the rest of the Greek Cuisine. Palaiokastritsa is a part of this town and offers you the very famous monastery. Apart from which you can also undertake a lot of water sports and activities and spend roughly a week or so just exploring the beaches. While in Greece, do make it a point to come to this beautiful town and also witness the Bella Vista.

The history of this town is not very well known, but it is known to be a Byzantine settlement which was in the ancient times located between Alipa and Saint Spyridon bays. The date of establishment cannot be traced, even though this Byzantine settlement was quite big. Even the community was quite prosperous and in the olden times, the area was called Paleopoli. It used to have four churches in the past out of which the ruins of two of them can still be found.

The name of Palaiokastritsa means old castle in Greek and indicates the existence of an old Castle, which is said to be present on the hillside where the famous Monastery of Theotokos is situated today. It is also contemplated that the name was first given to the Monastery after which the name of the city was copied.

Essential travel information and Palaiokastritsa tips for your visit