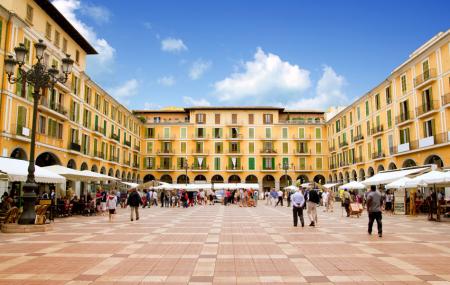 If you wish to taste the true old city life spirit of Palma de Mallorca, this should be your destination. Many people say consider some other location as the center of the city. However, for locals this is the epicenter of Palma. Proving this fact, there is a popular saying “all roads lead to Plaza Mayor”. The moment you enter the plaza, you can well understand why this place is so popular. One glance at it will show how big the plaza is. It is surrounded by 14th century Spanish buildings. Today, the plaza has become a center for many artists. You can find many galleries around the plaza. Beside this, the weekly market that is held in this place let you buy goods from the colorful vendors. You can also find boutiques, cafes, centers where costumed street performers and musicians perform. At night, all locals and tourists gather here to enjoy food and hear music being performed at the center.

How to Reach Placa Major

Love this? Explore the entire list of places to visit in Palma De Mallorca before you plan your trip.

Fancy a good night's sleep after a tiring day? Check out where to stay in Palma De Mallorca and book an accommodation of your choice.

94.12% of people prefer to travel by car while visiting Placa Major

People also prefer to start their day with Placa Major.