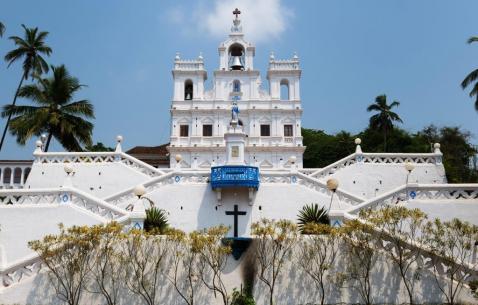 Panaji (Panjim) is the capital of Goa, a former Portuguese colony situated in West India. But Goa is a tiny state compared to others in India. On a visit to this city, you’d actually not confine yourself to the boundaries of it. The magic of the state will take over, luring you to explore Goa on the whole.

Historically, Goa became an independent state from Portugal in 1961and still harbors a lot of Portuguese cultural influence. It plays host to a large number of both international and domestic tourists yearly. Goa has two parts namely North Goa, with Panaji as its capital and South Goa, with Madgaon (Margao) as its capital. Since Goa is such a tiny state the Goa travel guide is mostly centered on Panaji.

Goa is an amazing mélange of historic places, beaches and of course the amazing party scene. It has become such a popular tourist destination precisely because of this amazing coming together of culture, history, an amazing atmosphere and most importantly fun. Meat lovers would probably want to settle here for life. The entire state serves a range of non-vegetarian delicacies like beef, pork, chicken, and a plethora of fresh seafood. The food is usually cooked in Indian spices and the taste lingers long after your meals. As a bonus, the booze always comes cheaper in the city.

When you go to Goa, do enjoy the beaches and the popular hangout spots. There is never a dearth of things to do in Goa. But don’t forget to explore the tiny lanes and the mangrove forests. To see the beautiful basilicas and churches but at the same time don’t forget to find the smaller, lesser-known places to see according to the best time to visit Panjim places. If you are an explorer at heart, Goa will become much more than just another beach holiday destination. It will surely surprise you.

Essential travel information and Panaji tips for your visit

Tipping- Tipping is appreciated but optional.

Ø It is safe to avoid secluded areas after dark.

Ø Bus and train are cheaper modes of transport.

Ø Make sure the rickshaw driver rides you around the town on a metered basis.

Ø It is wise to dress modestly if visiting a church.

Plan Your Trip To Panaji

The best tours and activities in the city, guided by experts to give you a local insight to the best of Panaji