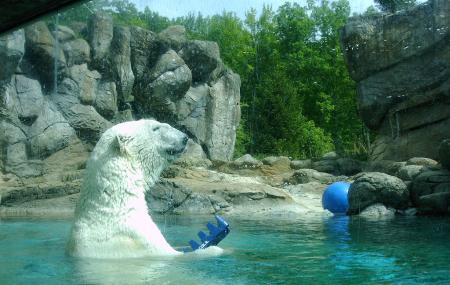 This is a non–profit organization running on public donations. The main purpose of this organization is the conservation of rare, endangered and exotic animal species along with the regular zoo species. The zoological park covers quite a large area of lush greenery and the beautiful ‘Swan Lake’ enhances the beauty of the place. You will find domestic animals roaming around in the open and a different section for wild animals. Some animals are of course known but there are some about whom you might have never heard of. They are also not easily seen or found.

The big cats are the talking point of the park. They cover much of the park area along with lions, jaguars, white and yellow Bengal Tigers, giraffes, goats, llamas, kangaroos. There are also three islands that are home to a number of lemurs, orangutans and siamangs.

The unknown or rare species mostly include spectacled bears, kinkajous, mandrills, colobus, capuchin and Diana monkeys. The African wild cats are also a sight to behold. There are quite a number of migratory birds as well.

Animal shows are a huge success in this park since it was opened in 1992. The park’s popularity has increased every year with an annual footfall of more than a million. The number of shows including “Parrots of the World”, “Going Wild”, “Wolf Encounters”, “Zoobilee”, etc are hits.

Love this? Explore the entire list of places to visit in Panama City Beach before you plan your trip.

Fancy a good night's sleep after a tiring day? Check out where to stay in Panama City Beach and book an accommodation of your choice.