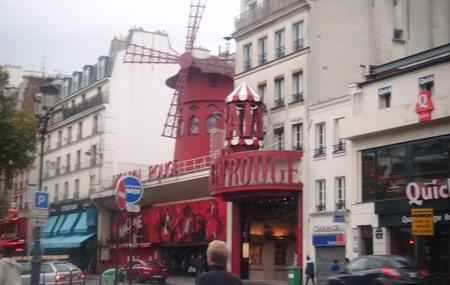 A distinctive red windmill marks the world’s most successful ‘slumming’ spot for posh types, located in the fashionable seedy Montmarte. Opened in 1889 as a ‘temple to music and dance’, the Moulin Rouge has always known that it caters to tourists from far-flung place that came in looking for some risqué titillation. And it has almost always delivered, night after night, for over a hundred years. Over the years it has evolved considerably, from a poorly organised and bawdy showpiece fronting a brothel, to a renowned, highly developed cabaret production. Extravagant, sexy, flashy and unashamedly gaudy, an evening in the Moulin Rouge explodes on the senses in sheer Epicurean excess. You’ll never run out of things to say (or hear) about the cabaret that made Paris famous as a city for debauchery; especially once you’ve seen the smattering of side shows that take place in between costume changes.

How to Reach Moulin Rouge

89.2% of people prefer to travel by car while visiting Moulin Rouge