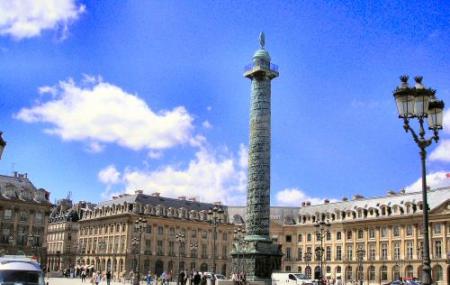 Place Vendome is a square in the first province of Paris, France, placed to the north of the Tuileries Gardens and east of the Eglise de la Madeleine. It is the beginning stage of the Rue de la Paix. Its customary structural planning by Jules Hardouin Mansart and decorated screens canted over the corners give the rectangular Place Vendôme the part of an octagon.

The definitive Vendome Column at the middle of the square was raised by Napoleon I to celebrate the combat of Austerlitz. However, it was torn down on 16 May 1871, by declaration of the Paris Commune, and consequently re-raised and remains an unmistakable characteristic on the square today. At the focal point of the square's long sides, Hardouin Mansart's extend of Corinthian pilasters were built under a pediment, to make royal residence like fronts. The arcading of the formally rusticated ground floors does not furnish an arcaded way as at Place des Vosges. The compositional interfacing of the windows from one story to the following, and the expanding curve of their window arches.

How to Reach Place Vendome

82.86% of people prefer to travel by car while visiting Place Vendome