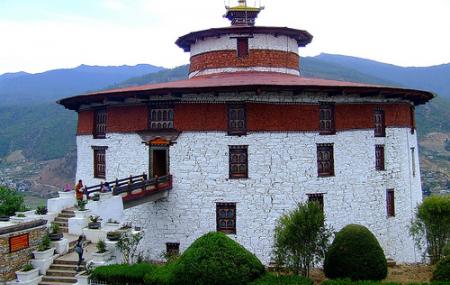 Located above RinpungDzong, National Museum of Bhutan was established in 1968 in the renovated building of the ancient Ta-dzong, a 17th-century watchtower.A cultural museum in Paro in western Bhutan, it was constructed under the patronage of His Majesty, the King JigmeDorjiWangchuck, the third King of Bhutan. Opened in 1968, some of the most exquisite pieces of Bhutanese art, including absolute masterpieces of fine art, bronze statues and paintings are housed here, elegantly on display in aesthetical arrangements.

The National Museum of Bhutan possesses, today, over 3,000 works of Bhutanese art, spanning over 1,500 years of Bhutan's cultural heritage, making it a major attraction for visitors with its rich treasury of creative traditional artefacts. The museum is one of the few educational institutions that interpret the history and culture of Bhutan through its exhibits, conducting symposiums, publication of research findings and conservation of artefacts that track the country’s transition from the Stone Age to a modern Mahayanist Buddhist and multicultural kingdom.

You will also find Bhutanese textiles, jewellery and handicrafts sections as well as galleries of stuffed animals and butterflies. The hall of stamps hereis renowned and displays of 3-D stamps, silken stamps, record stampsand the famous triangular stamp depicting the yeti are the most popular. The top floor of the Museum is a chapel containing a Buddhist “tree” depicting the primary figures of the four religious schools of Tibetan Buddhism.

Designed with connoisseurs, scholars and tourists in mind, its unique character is complemented by the panoramic views over Paro Valley. The preservation of Bhutanese cultural values is one of the Nine Domains of Gross National Happiness, the Bhutanese philosophy for national development, as enshrined by the Bhutan National Museum.

Love this? Explore the entire list of places to visit in Paro before you plan your trip.

Fancy a good night's sleep after a tiring day? Check out where to stay in Paro and book an accommodation of your choice.

People normally club together Jangsarbu Lhakhang and Chele La Pass while planning their visit to National Museum Of Bhutan.