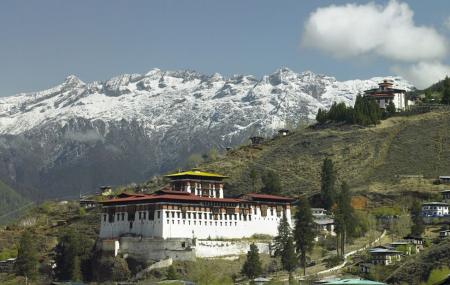 The ParoDzong is commonly referred to as the RinpungDzong, and is a fortress-monastery commanding the view of theParo valley, as though pondering over its long, tumultuous history. Guru Padmasambhava or Guru Rinpoche initially built a monastery here towards the beginning of the tenth century, the size of which was increased in 1644 by NgawangNamgyal on the old foundations to an imposing five-story structure. This served for the following centuries as a clever and effective defence point against invasion attempts by the Tibetans.

Below the dzong, a traditional wooden bridge called NyamaiZam spans the ParoChhu, a reconstruction of the original, which was washed away in a flood in 1969. This bridge also served important defence purposes as ealier versions of it were removed in time of war to protect the dzong. The most picturesque views of ParoDzong are taken from the west bank of the river.

The ParoDzong’s alternative name comes from the fact that it is built with stones instead of clay, as Rinpung literallytranslated into ‘heaps of jewels’. The structure survived the 1897 earthquake but the fort and all its jewels, however, succumbed to a fire in 1907, leaving only one thangka, known as Thongdel, intact. The Dzong was then rebuilt by the PenlopDawaPenjor after the fire.

Today, it houses fourteen shrines and chapels within its premises. The courtyard inside the fortress is used for ParoTsechu, one of the most important Bhutanese festivals. The dzongalso has a priceless collection of sacred masks and costumesand the beautiful prayer wheel out front incredibly beautiful. Some relics preserved here date back several centuries, while others were contributed by DawaPenjor and his successor PenlopTsheringPenjorrecently. Like most dzongs, this one too houses both members of the monastic body (about 200 monks) as well as government offices.

above the Dzong stands an ancient watchtower called Ta Dzong which has been the National Museum of Bhutan since 1967.

Love this? Explore the entire list of places to visit in Paro before you plan your trip.

Fancy a good night's sleep after a tiring day? Check out where to stay in Paro and book an accommodation of your choice.

82.22% of people prefer to travel by car while visiting Paro Dzong

People normally club together Taktsang Monastery and Kichu Lakhang while planning their visit to Paro Dzong.