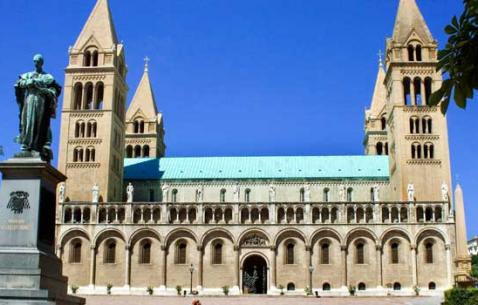 The historical city of Pecs is situated in south-west Hungary on the slopes of the Mecsek Mountains near the border of Croatia. It’s the fifth largest city of Hungary and the economical and administrative centre of the Baranya County. Pecs’ tourism invites visitors to explore its natural bounty and dazzling nightlife!

It was founded by the Romans all the way back in the 2nd century and was called Sopianae and was an important Christian city. However, before the Roman era, the area of Pecs was occupied by the Celts. In the 1500s, the city came under the rule of the Ottomans and all churches were then destroyed and converted into mosques.

Now, with the history of wars and sieges behind it, the city is considered a religious and cultural melting pot with many Hungarians, Croatians and Danube Swabians living together in peace and harmony. In fact, the city’s tolerance towards different culture is world-renowned. It even won the UNESCO Cities for Peace prize in 1998 for its assistance of refugees of the Balkan wars. Its motto is ‘borderless city’. The city is famous for its religious and historical sites like the Early Christian Mausoleum which is a UNESCO World Heritage Site. Pecs also has a large student community as it is home to the University of Pecs.

With a mild and pleasant climate almost all year round, Pecs is a peaceful and enjoyable city to visit. Don’t let the calmness of the day fool you though. Pecs has a vibrant nightlife that rivals that of Budapest. The city is also famous for its delicious wines which are worth trying when you’re visiting.

Essential travel information and Pecs tips for your visit

Plan Your Trip To Pecs

The best tours and activities in the city, guided by experts to give you a local insight to the best of Pecs