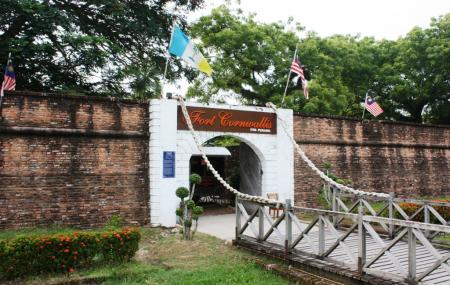 Fort Cornwallis is the largest standing fort in Malaysia. Set close to the Esplanade and Penang Clocktower, the star-shaped bastion is one of the oldest structures in Penang. Named after Marquis Charles Cornwallis, only a set of ten-foot high outer walls remain, with an enclosed park within.

Situated on Penang’s north-eastern coast, a stroll along the privately-managed Fort Cornwallis’ perimeters will take you about 10 minutes. It is a surreal experience to hear the 1812 Overture playing over the speaker system while a Malaysian man dressed in full British regalia stands at the gate. Inside the fort is a variety of vaguely-informative exhibits.

Built in 1786, Fort Cornwallis was intended as a defensive structure against pirates, Kedah forces and even the French during the Napoleonic Wars. However although it was initially built for the Royal artillery troops and the military, it served an administrative function rather than an actively defensive one.

Spanning 4490 sq.ft. it was built as a stockade with no permanent structures. The fort stands on the site where Captain Francis Light first set foot in 1786 on the then virtually-uninhabited Penang and took possession of the island from the Sultan of Kedah. He then established a free port to lure trade from Britain’s Dutch rivals.

Originally built of nibong palms, during Colonel R.T. Farquhar’s term as Governor of Penang Fort Cornwallis was rebuilt with bricks and stones using Indian convict labor thus transforming the wooden fort into a stone structure. Fort Cornwallis’ star shape is attributed to the fact that this design was a better defence against multiple fields of fire from enemies.

A bronze statue of Captain Francis Light stands near Fort Cornwallis’ main entrance. Inside the fort are prison cells, barracks, munitions storage areas, a harbour light once used to signal incoming ships and the original flagstaff.

At the southwest corner of the fort is Penang’s first chapel, built in 1799. You can also see several old bronze cannons inside the fort including Seri Rambai, which is popularly regarded as a fertility symbol. Locals often place offerings of flowers and joss sticks at its base.

How to Reach Fort Cornwallis

68.05% of people prefer to travel by car while visiting Fort Cornwallis