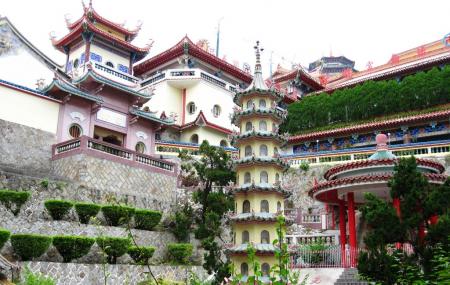 Also known as the Temple of Supreme Bliss, Kek Lok Si is said to be the largest Buddhist temple in Southeast Asia, and arguably one of the most famous in Penang. Located in Air Itam, the hills in that area (called “He San” or Crane Hill) have traditionally been regarded as geomantically significant, having all the right “feng shui” for a temple.

In fact, they are extremely popular as a retreat for monks and Taoists striving for immortality. The temple’s construction began in 1893, inspired by the chief monk of the Goddess of Mercy Temple at Pitt Street. The Manchu Emperor Guangxu approved of the project, bestowing a tablet and gift of 70,000 volumes of the Imperial Edition of the Buddhist Sutras.

Other Chinese rulers, such as His Majesty Emperor Kuang Xi and Empress Cixi of the Ching Dynasty, have been sufficiently impressed with the temple so as to have bestowed the temple with gifts.

The best time to visit Kek Lok Si is during the Chinese New Year celebrations, when the temple is adorned with thousands of bright hanging lanterns. At other times, there is still much to see, with prayer halls, pagodas, bell towers and a tortoise pond topping the list.

Its main draw is the striking seven-storey Pagoda of Rama VI (Pagoda of 10,000 Buddhas), completed in 1930. Boasting 10,000 alabaster and bronze statues of Buddha, its design symbolises the harmony between Mahayana and Theravada Buddhism, marrying a Chinese octagonal base with a middle tier of Thai design, topped by a Burmese crown.

One can climb to the top of the pagoda via a steep flight of stairs and be rewarded with a great view of Penang. The 30.2m bronze statue of Kuan Yin, the Goddess of Mercy, is yet another popular highlight.

How to Reach Kek Lok Si

91.6% of people prefer to travel by car while visiting Kek Lok Si