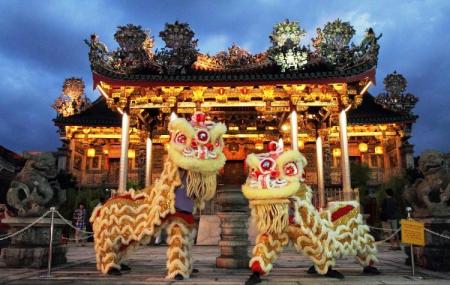 Hidden in a maze of alleys and pre-war houses is the breathtakingly beautiful Khoo Kongsi – clanhouse built by the early Khoo clanmen more than 100 years ago. Three tucked away entrances at Cannon Street, Beach Street and Armenian Street will lead you the magnificent structure built on a beautiful courtyard.

In 1901, the Leong San Tong was almost burned to the ground on the eve of the Chinese New Year. Five years later, a new Indo-Malay bungalow with Fujian temple and prayer pavilion stood in its place, signaling the re-birth of one of the most majestic clan houses in South East Asia.

Inside the clanhouse, elaborate murals and carvings tell of a rich history. Gold name plaques hang on the walls honouring those who have done the clan proud.

Founded by Hokkien immigrant workers who came to Penang to seek greater fortune, the clanhouse was set up promote clan solidarity and to foster Confucian core values such as filial piety and respect for the elders.

How to Reach Khoo Kongsi

91.82% of people prefer to travel by car while visiting Khoo Kongsi

People normally club together Wat Chayamangkalaram and Fort Cornwallis while planning their visit to Khoo Kongsi.