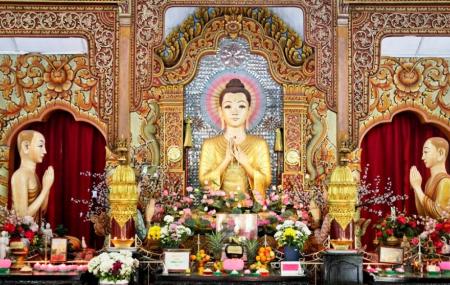 Wat Chaiya Mangkalaram is a Thai Buddhist temple in George Town, Penang, Malaysia, most notable for its Reclining Buddha statue. The statue is the 3rd largest of its kind, being 33 meters in length.

In the main shrine in front of the Reclining Buddha there are smaller shrines of different Buddhas and popular Thai deities. Also on the temple grounds many colored statues of Devas and other mythical creatures are on display.

The temple was built in 1845 on a piece of land given by Queen Victoria to four women trustees as a gesture of goodwill to boost trading relations with Thailand.

The first monk was a Theravada Buddhist monk from Thailand, Phorthan Kuat, also known as the "Powerful Monk". Legend has it that he was very fond of laksa, a local specialty and even today devotees bring a bowl of laksa as an offering to his shrine.

In addition to the 108 ft-long reclining Buddha, Wat Chaiya Mangkalaram Temple also has smaller statues of the ‘Awakened One’ in various guises plus you can also see statuettes of other popular Thai deities in the main prayer hall.

Besides that there is a series of colourful statues of Devas and other mythical creatures on display, spread out across the temple grounds. Vibrant murals depicting Buddha’s life story are painted on the temple walls.

How to Reach Wat Chayamangkalaram

People normally club together Protestant Cemetery and Khoo Kongsi while planning their visit to Wat Chayamangkalaram.