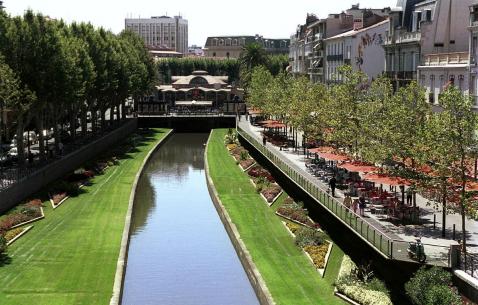 Situated on the foothills of Tyranees, Perpignan is a city in the Northern Catalonian region of France. The city, which has the rivers Têt and Basse flowing across seems Half-French, Half-Catalan due to its topographical and cultural influences. The sunny city boasts of its local wine and food as much as it enjoys a good sport, especially the rugby game.

A former capital of Majorcan royalty, Perpignan was continuously under various rulers until it finally belonged to the French in 1659 with the Treaty of the Pyrenees. During the middle ages, textile industry was rapidly developed in the region. In the recent years, it became a home to hundreds of Moroccans and Algerians, who moved to France to avoid repressions.

Perpignan is unique in its traditions, owing to its multiculturalism. The city, though located in France, has its own Spanish touch to it. When you enter the city as a tourist, the locals give you a warm welcome into one of the most fascinating places of France. You’d be so charmed by its beauty that reflects in its alleyways with bright pastel coloured tenements and boulevards lined with palm-trees.

While at the city, your itineraries will be filled with so much to see and do. The splendid abbeys of the city, culturally and historically enriched museums, and the Gothic style cathedrals mesmerize you with their immaculate architecture.

The picturesque landscapes, diverse culture, beautiful rivers, rich wild life, Cathar Castles and the historic town centre, everything adds to its enchanting tourism. With its uniquely cultivated traditions and a distinct appeal, Perpignan will be one city in your vacation planner that you would want to visit again.

Essential travel information and Perpignan tips for your visit