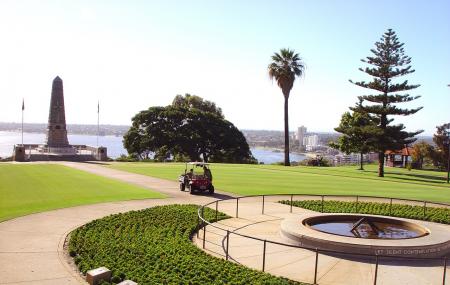 Kings Park is one of the largest inner city parks in the world and receives over 5 million visitors each year. The park is over 1000 acres of lush greenery and native flora and fauna. Set on Mt. Eliza, the park offers stunning views of the Swan River.

The Botanic Garden sits on 18 hectares within the park. It has over 2000 species of native Western Australian flora including the jarrah and karri trees, sugar gums and bangalays, as well as Bunya and Norfolk Island pines.

Among the park’s numerous tourist attractions are:

The park is an ideal spot for picnics and also has free barbecues installed for public use. There are also several restaurants, shops and cafes located in the park. The Kings Park festival showcasing the wildflowers of Western Australia is held here every spring. Also, visit the popular attractions in the city by following Perth Itinerary 7 Days.

How to Reach Kings Park And Botanic Garden

Love this? Explore the entire list of places to visit in Perth before you plan your trip.

Fancy a good night's sleep after a tiring day? Check out where to stay in Perth and book an accommodation of your choice.

94.81% of people prefer to travel by car while visiting Kings Park And Botanic Garden

People normally club together Perth Zoo and Cottesloe Beach while planning their visit to Kings Park And Botanic Garden.