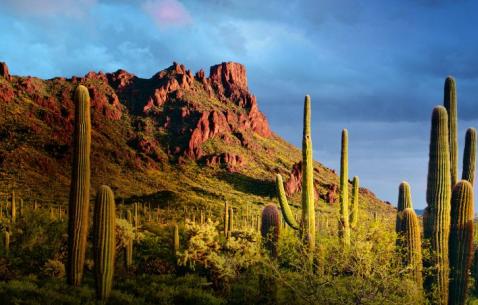 Phoenix is the sixth largest city in the United States and is the capital of the state of Arizona. A whopping 4.3 million people call this city their home.

Historically, the unforgiving, arid desert land was made arable by the Hohokam peoples who lived in the area for more than 2,000 years. They abandoned the area in the 1400s after a series of droughts and floods. The area became a part of the New Mexico Territory after the end of Maxican-American War in 1848.

The city earned its name after a confederate veteran of the civil war Jack Swilling saw a potential for agriculture. Lord Darrell Duppa suggested the name Phoenix to mean a ‘city born from the ruins of another civilisation’. The town was officially recognised in 1868. The city has gained popularity as a tourist destination because of its exotic location in the middle of Sonoran Desert. Keep your sunblock handy when travelling to Phoenix!

Mountain lions, bobcats, rattlesnakes, jaguars, coyotes, roadrunners and many other desert dwelling animals and birds can sometimes be found within Phoenix boundaries. The economy depended on agriculture and the meat industry in the past but as expanded exponentially since then and now includes industries like real estate, tourism, financial services, construction and many others.

The city has also grown to become a hub for arts and culture with numerous performing arts venues and museums in and around the city like the famous Phoenix Symphony Hall and the Heard Museum which celebrates Native American Culture.

It’s a beautiful urban jungle to visit boasting of many scenic views and experiences and an exotic desert setting that you won’t forget.

Essential travel information and Phoenix tips for your visit

Plan Your Trip To Phoenix

The best tours and activities in the city, guided by experts to give you a local insight to the best of Phoenix