Soul Of Motown The Early Years 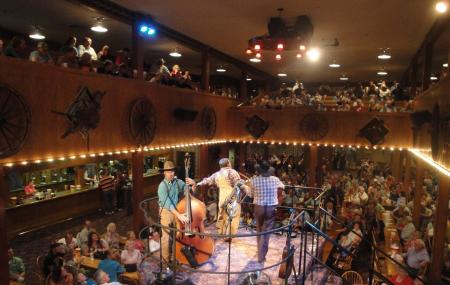 Find hotel near Soul Of Motown The Early ..

The Drifters, The Platters, Sam Cooke, Smokey Robinson, Jackson 5, Marvin Gaye, Stevie Wonder, The Four Tops, The Temptations, The Impressions, The O'Jays, and Earth Wind & Fire. Take a walk down memory lane to a time when you could sing all the words to the songs and feel good about it. At the Soul of Motown, the Grand Majestic Band delivers a supreme tribute to some of the greatest vocal groups ever to hit the charts, from the early years till now!

Soul music is a popular music genre that originated in the United States in the 1950s and early 1960s. It combined elements of African-American gospel music, rhythm and blues, and often jazz. Soul music became popular for dancing and listening in the United States. Soul also became popular around the world, directly influencing rock music and the music of Africa. This music that arose out of the black experience in America is characterised by catchy rhythms, stressed by handclaps and impromptu body moves. Other characteristics are a call and response between the soloist and the chorus, and an especially tense vocal sound.

Motown is an American record company. It was founded by Berry Gordy, Jr. on January 12, 1959, in Detroit, Michigan, as Tamla Records, and was incorporated as "Motown Record Corporation" on April 14, 1960. The name, a blending of motor and town, is also a nickname for Detroit. Motown played an important role in the racial integration of popular music as an African American-owned record label which achieved significant crossover success. In the 1960s, Motown came to be known as the Motown Sound, a style of soul music with a distinct pop influence.

At the Soul of Motown hear the distinct male harmonies, see the grooving dance moves all performed to songs from the library of the greatest Motown Acts of all time. The show is high energy and fast paced and you will wish the night would never end. The band will perform dance steps of all the different groups they cover to perfection, and leave you feeling transformed to that time period. The music is bound to get you on your feet. Along with the superb show, they have buffet dinner as well.

Entrance Ticket Details For Soul Of Motown The Early Years

Love this? Explore the entire list of places to visit in Pigeon Forge before you plan your trip.

Fancy a good night's sleep after a tiring day? Check out where to stay in Pigeon Forge and book an accommodation of your choice.

Are you associated with this business? Get in Touch
Monday