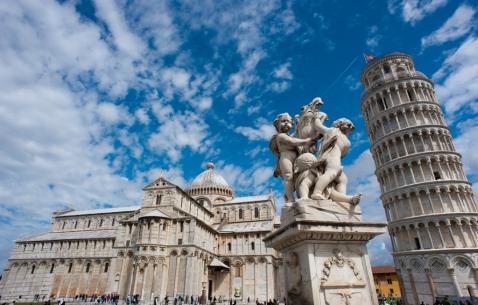 Oh sure, you’d think that the famously lopsided tower is the only reason for Pisa holidays, but you’d be so, so wrong. In a quick break down, the things to do in Pisa extend to and revolve around loads of brilliant architecture, an intense and thriving student culture, some really curious shopping and really awesome food.

Pisa lies at the junction of two supremely historically important rivers – the Arno and the Serchio. Even more significantly, though it lies six miles away from the coast now, during it’s establishment, it was a seaport, and so a major military and trade post. There are many theories about who founded it, but for most of it’s early history, it was a part of the Roman Empire. Even as that empire declined, Pisa became a major naval authority, conquering many other naval cities and Saracen pirate outfits. It continued to play an important political, religious and military role for the next several centuries, with Genoa, Florence, and Venice as it’s main competition. And just when it seemed that Pisa was indomitable, it failed; a series of defeats against the tactically brilliant Genoese started Pisa’s long decline and eventual crumbling. Eventually, Pisa came under Florence’s domain.

Still, all the architectural development remained and continued to flourish; other Pisa tourist attractions include rich museums and historical buildings. The city rebuilt its image as a centre of learning. Galileo himself was born here, as was Fibonacci, so if you’re willing to deviate from the main attractions, you could add these birthplaces to your list places to visit in Pisa.

Life in Pisa is generally laid back; there is no heavy nightlife. Rather, everybody from students to the elderly spend nights with some beer, finger food and long contemplative walks – the easy and good life. Holidays to Pisa really are all about chilling under the Tuscan sun.

Plan Your Trip To Pisa

The best tours and activities in the city, guided by experts to give you a local insight to the best of Pisa