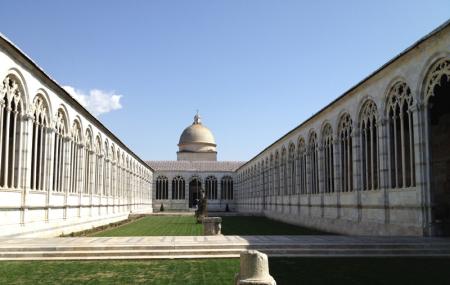 More serene than spooky- the Camposanto Monumentale is probably one of the prettiest graveyards you’ll see. With beautiful art and architecture preserving the bodies of numerous souls, this cemetery is a must see for all of those visiting Pisa. The cemetery is said to have been build upon holy soil brought back from Golgotha, the soil upon which Christ was crucified, thus the name ‘Campo Santo’ or ‘Holy Field’. The suffix ‘Monumentale’ is to distinguish these burial grounds from the newer one within the city.

The cemetery was built between 1278 and 1464 and was the last structure to be created within the famous Piazza. The architect, Giovanni di Simone, created a Gothic styled cloister to enclose the holy ground. As you walk through the cemetery grounds, you’ll notice a number of famous Pisan names as this served as the final resting place for most of Pisa’s upper class of the time. During the subsequent years, delicate sarcophagi were attached all across the cathedral and its walls were covered in divine frescoes. Many of these were destroyed during the fire that was created by an aerial strike during World War II but were restored and relocated to the MuseodelleSinopie. Thankfully, you can still see a few in their original places.

The cemetery is symbolism for death. Initially, the cemetery was to be a church but plans changed at some point during construction. Along with the Battistero, which stands for ‘birth’ and the Cathedral, which stands for ‘life’, this cemetery completes the cycle. Due to this, it is regarded as a deeply sacred place for Christians. This cemetery is further elevated in status due to the holy soil upon which it was built. On top of that, a pope of the Catholic church was buried in the grounds of the Piaza as well, thus heightening the religious and cultural significance of this site. The stunning religion themed artwork combined with its serene white and gray colour palate has made this old cemetery one of the most famous in the world

Many people visit the Piazza every day but are usually blown away by the stunning Leaning Tower of Pisa and do not notice the quieter charm of the cemetery. This is a sad mistake, as Camposanto is full of beautiful artwork that’ll readily take your breath away. Its outer walls are made up of 43 blind arches, with its entrance crowned with a tabernacle containing the Virgin Mary with Child, surrounded by four saints. There are three chapels your eyes will meet, named Ammannati, Aulla and Dal Pozzo. An unusual trait of this cemetery is that most of the bodies buried here are preserved under the arches and floor boards while a few can be found in the central lawn outside. Once upon a time, delicate sarcophagi were attached all across the cathedral and its walls were covered in frescoes but after a terrible fire, have been placed inside the Museum of the Cathedral, between the between Piazza dell' Arcivescovado and Piazza del Duomo.

How to Reach Camposanto Monumentale

58.18% of people prefer to travel by car while visiting Camposanto Monumentale

People normally club together Piazza Del Duomo and The Knights' Square while planning their visit to Camposanto Monumentale.