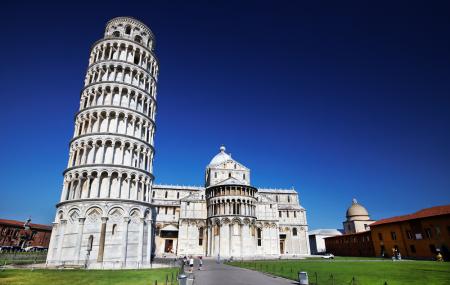 A part of a UNESCO World Heritage Site, one of the wonders of the world and an architectural anomaly, welcome to the Leaning Tower of Pisa! The Tower or La Torre pendent di Pisa as it’s locally known, has captured the hearts and imaginations of people all across the globe. Its 3.97 degree tilt has resulted in this freestanding bell tower being one of the most recognizable structures on the planet. You’ll remember seeing this tower in countless movies, cartoons and postcards. In fact, its image appears in many, if not most, cases when Italy is alluded to.

It all started in 1172, when the first few stones were purchased. The true architect of the tower is debatable and this confusion isn’t surprising since it took more than three centuries to build it. Construction started in 1173 but by 1178, the tower’s weak 3 meter deep foundation started to give way and one side began to sink into the soft, marshy soil. Due to the constant wars Pisa was engaged in with its neighbors, construction stopped for the next hundred years. After construction resumed, it had to halt yet again due to the Battle of Meloria. It was finally complete in 1372. 14,500 tons of white marble, spanning 8 stories all styled in Gothic and Romanesque designs finally stood proudly, albeit at an angle.

This tower is a third of Pisa’s Cathedral Complex, and the entire square was declared a World Heritage site by UNESCO in 1987. The tower itself has seen war as well as scientific developments, making it a symbol of Italy- both old and new. In a quirky twist, the battles that caused the construction to cease, saved the building as it allowed the weak sub soil to settle, before the other stories were added. This may be the first instance where war has done some good! The tower is also the point from where Galileo conducted numerous scientific experiments.  During the Second World War, German troops used the tower as a look out but were discovered by the American troops. In what probably seemed like an actual miracle, the Germans were left untouched, because the beauty of the tower stopped the Americans from destroying it!

Today, thousands are drawn to the beautiful seaside town of Pisa just to see this tower in real life. You can rent a tandem bike and cycle around the square, while families and friends lounge on the lush grasses. It’s become a tradition to take a picture pretending to push over or hold up the tower and as clichéd as that is, it’s still fun!  Climb up the tower and divide your time trying to hike up and stop yourself from falling over during the same climb! If you’re able to get to the top, you’ll be rewarded with a stunning view of the entire area. You can also visit the nearby museum and then enjoy a delicious meal at one of the nearby restaurants, while the tower lights up and glows against the night sky.

How to Reach Leaning Tower Of Pisa

58.61% of people prefer walking in order to reach Leaning Tower Of Pisa

People normally club together Pisa Baptistry and Piazza Del Duomo while planning their visit to Leaning Tower Of Pisa.