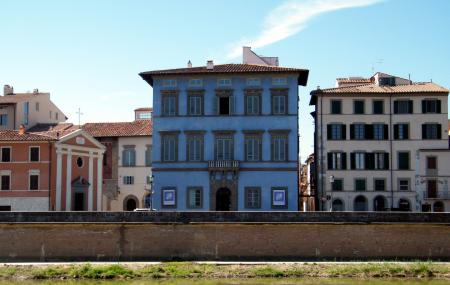 Would you like to immerse yourself in beautiful art or brush your fingers against intricately detailed woodwork? Maybe learn more about Galileo and his scientific adventures? Then what you need is a visit to the Fondazione Palazzo Blu, a heady combination of all three. Frescoes, paintings and a new exhibition on scientific discoveries and errors await you at the blue steps of this beautiful palace.

The Palace was actually called Palazzo Giuli Rosselmini Gualandi after the Count who owned it but restoration work left the walls of the Palace a light blue which led to its more popular name, Palazzo Blu. Even the herringbone patterned pavement in front of the Palace has stories to tell, with some of its tiles dating back to the 12th century. Before it became a gallery, the palace was an important landmark in Pisa, and many lavish balls and political negotiations took place under its roof. It was only towards the end of the 16th century that the walls were painted blue, in honour of the great Italian masters at the court of the Russian Czar who designed and painted palaces in St. Petersburg.

The palace served as a stakeout for allied forces during the Second World War but sadly, it suffered quite a bit of damage. This led to the Fondazione Cassa di Risparmio di Pisa to renovate its decaying walls and turn it into the museum that stands today. The palace served as a home for the Giuli Counts up till 2001 but now houses paintings, antiquities, coins, woodcuts, etchings and lithographs inside beautiful, eighteenth century rooms, with antique furnishings. Today, the Palazzo is a great tourist attraction, attracting visitors by the hundreds.

On the top most floor is a collection of paintings and fine art which range from 14th century artwork and frescoes to modern day work by local artists. The first floor remains untouched and will give you a firsthand glimpse of how the Counts used to live! Lavishly furnished rooms decorated with antique furniture will greet you, including a sumptuous lounge and enormous dining area, all decorated with fine statues and artwork. A large library and a room full of Greek and Roman coins will give you plenty to go through. The pretty wood carvings and other woodwork will give you tingles and right down in the basement, is a temporary scientific exhibition with fascinates most visitors.

Each room comes with an information packed booklet, available in multiple languages which will give you a good idea about the history behind each delightfully decadent room. The Palazzo has numerous temporary exhibits throughout the year, like their past exhibition on Andy Warhol and their current one on scientific errors before and after Galileo. This attraction is free of cost, which makes the entire experience not only beautiful but also an unbelievable bargain!

How to Reach Palazzo Blu

67.1% of people prefer to travel by car while visiting Palazzo Blu

People normally club together The Knights' Square and Borgo Stretto while planning their visit to Palazzo Blu.