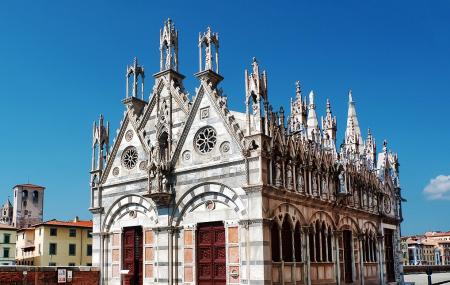 Austere walls point upwards and prick the sky as you gaze upon the darkly beautiful Santa Maria della Spina. Many find it hard to believe that this incredibly beautiful Gothic church was fashioned out of a featureless slab of white marble. You’ll be enchanted by this small church, situated near the Arno river. This church is said to have housed a thorn from the crown of Christ himself, thus the word ‘Spina’ in its title. Its ornate exterior, diminutive size and dreamy location will shoot Cupid’s arrow straight into your heart.

The church was erected in 1230 and was originally called Santa Maria di Pontenovo. In 1333, it said that the church was home to a thorn, broken off from atop the crown of Jesus Christ himself, thus the new name. Though the thorn is now preserved in the Church of Santa Chiara, the moniker stuck around and even today, the church goes by the title ‘Santa Maria della Spina’. In 1871, the church was torn down and rebuilt, brick by brick, in order to avoid water damage from the steadily rising river Arno.

The church looks like a decorative ornament, more likely to be on top of a cake rather than amongst the colourful menagerie of Italian houses it is surrounded by. Its exterior is known to be one of the most impressive works of art in all of Europe. Its rectangular body is striped and covered in stunningly intricate tabernacles and cusps. The facade has two arched gates, upon which rests a statue of Madonna with the Child and two Angels. If you look closely, you’ll be able to scout out a statue of Christ as well. With all these wondrous and well crafted figures grazing the cake-white body of the facade, visitors are often taken aback by the sheer beauty of this church. Contrastingly, the interior is quite minimalistic with a painted ceiling over a single room. It is here that the main artistic attraction lies is wait, a Gothic sculpture of the Madonna of the Rose by Andrea and Nino Pisano. The duo had created another statue for this church but it was shifted to the city’s National Museum of San Matteo.

Stroll along the river Arno as it gently laps against your feet until you reach this beauty. Drink it all in while the sunlight bounces of its white marble façade, lending it a warm glow. At night, the church is lit up by floodlights, turning it into a luminous fairy castle, calming and beautiful against the night sky. If you visit on a calm evening, you can take photographs of the church’s reflection in the river water. Spend time studying the heavily decorated exteriors and absorb every tiny detail. Once you enter the church, you’ll be dazzled by streams of sunlight, tinted by the Rose windows, forming shimmering patters on the white floors. The Santa Maria della Spina is one of Pisa’s lesser known jewels and one that you must discover for yourself to appreciate!

People normally club together Borgo Stretto and Museum Of The Ancient Ships Of Pisa while planning their visit to Santa Maria Della Spina.