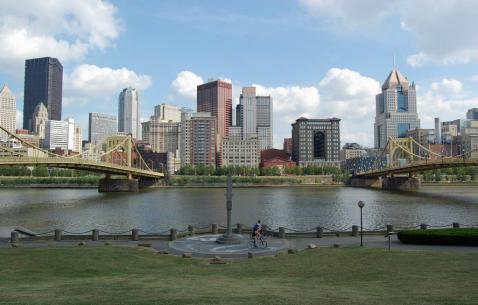 Pittsburgh is one of the most popular cities for tourism in the USA. Situated in the state of Pennsylvania, it is known by many names. Some call it the ‘Steel City’ due to its rich history of steel related business. Others like to call it ‘The City of Bridges’, for its 446 bridges around the city. The city is situated at the confluence of the Monongahela and Allegheny rivers, which meet to form the Ohio River. The population of the metropolitan area of Pittsburgh is roughly 2.4 million. The city has a unique terrain which has resulted in an unusual city design. This in turn has given rise to a smattering of unique neighbourhood ‘pockets’, each of which has a rich and varied ethnic and cultural heritage. Pittsburgh has a very diverse history, and has many cultural treasures hidden away in its many neighbourhoods.

Pittsburgh has a very proud history in the arts and culture, dating from the 19th century to the present day. Their passion for the arts has given rise to many famous attractions. Some of these include the Heinz Hall for Performing Arts, the Andy Warhol Museum, the Carnegie Museum of Art, the Frick Art & Historical Centre, and the charmingly offbeat Mattress Factory. Pittsburgh residents also take their sports very seriously, and are extremely passionate about all the local teams, especially their football team, the Pittsburgh Steelers. You can catch one of their games and the famous Pittsburgh stadium atmosphere at the PNC Park.

The city is also home to a number of colleges, universities and research facilities. Among the most famous ones is the Carnegie Mellon University, the campus of which itself houses many historical sites and is open to the public. Pittsburgh also holds a number of arts and cultural festivals. Some of the favourites include the Three Rivers Arts Festival, Pittsburgh Folk Festival, Greek Food Festival, Three Rivers Regatta, Pittsburgh Vintage Grand Prix, and Little Italy Days.

If you could only do one thing in Pittsburgh, hop on to the famous inclines to the top of Mount Washington near South Side. The Monongahela and Duquesne Inclines can go up to 400 feet over the city from stations near Station Square. The views of the gorgeous city skyline from the top of Mount Washington are simply breath-taking, and the inclines have become synonymous with the city itself.

The people of Pittsburgh are as famous as the city itself. The culture of the city has been shaped by its immigrants, whose traditions have now became staples around different parts of Pittsburgh. The people of the city are generally perceived as welcoming, down to earth and not pretentious. Recently, it has also been steadily gaining reputation as a hub for counter culture. This, coupled with the fact that there are already some very enjoyable and historical attractions in the city, makes Pittsburgh one of the most exciting cities to visit in the United States.

All in all, the city’s brilliant combination of bridges, rivers and steep hills makes it among the most naturally scenic places in the region. Its heritage, which has been influenced by many cultures which have made Pittsburgh a place of rich diversity, gives the city its own unique flavour. It is a great city, with pretty much all the things to do a tourist could want or need.

Essential travel information and Pittsburgh tips for your visit

On Sundays in the fall and winter, some fans of the local football team (the Steelers) tend to get out of hand. While the great majority won't bother you, it is suggested that out of town fans do not wear the clothing of the team they are playing that day or that of their main rivals (the Baltimore Ravens) at any time.

Whether driving, bicycling, or walking, watch out for drivers making the "Pittsburgh Left". At traffic lights, a driver wishing to turn left will do so as soon as the light turns green, regardless of whether another vehicle has the right-of-way.

Often, you may find that there is no separate lane for parking, so driving in the right lane can mean you suddenly become stuck behind a parked car.

Pittsburgh is one of those cities where you must use an area code even when dialling locally. The City's main area code is 412, but the new 878 area code is also used.

Most areas of the city are safe for tourists, and most of the unsafe areas are residential, so tourists are unlikely to visit these areas. Nevertheless, extra caution, especially at night, should be used in the following neighbourhoods:

Plan Your Trip To Pittsburgh

The best tours and activities in the city, guided by experts to give you a local insight to the best of Pittsburgh