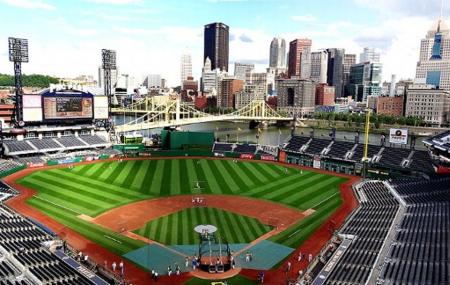 PNC Park is famous baseball park located on the northern shore of Pittsburgh. It is the home of the local baseball team, the Pittsburgh Pirates, and is hence a place of great importance for the residents! Open since 2001, PNC Park is one of the most famous and well maintained baseball parks in the country, featuring a natural grass surface and seating almost a staggering 39,000 people. Here, you can enjoy a baseball game, while at the same time taking in the renowned American sports atmosphere, complete with food and drink and many other in game attractions.

Located on the banks of the majestic Allegheny River, the PNC Park is as famous for its baseball as it is for the scenic views of the Pittsburgh skyline and riverfront. The PNC Park is quite special, as it has been designed to give the fan the most intimate sports experience. With the highest seat being just 88 feet from the field, there essentially isn’t a bad spot in the entire stadium to view the game from. Speaking of the game, Americans are extremely passionate about baseball, and each game sees thousands of home and away fans come together to cheer their teams on and create an ethereal, electric sporting atmosphere.

How to Reach Pnc Park

Love this? Explore the entire list of places to visit in Pittsburgh before you plan your trip.

Fancy a good night's sleep after a tiring day? Check out where to stay in Pittsburgh and book an accommodation of your choice.

93.38% of people prefer to travel by car while visiting Pnc Park

People normally club together The Duquesne Incline and The Strip while planning their visit to Pnc Park.