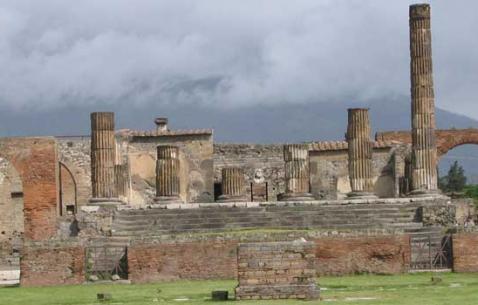 The Oscans founded it, the Romans conquered it and Mount Vesuvius annihilated it. Altogether, Pompeii enjoyed less than 800 years of history, and had it not been for Mt. Vesuvius completely losing it’s molten geological marbles, the city might have been one of the oldest and most culturally rich places in the region.

Vesuvius’s eruption hit the town so hard and quick, that many people were struck down here they stood. The pyroclastic flows and ash buried them in seconds and the hardened around their corpses. Death throes have rarely ever been preserved as well as they have here. As the corpses crumbled to dust, the hollows they left behind in the stone preserved their final shapes. When archaeologists finally came around, they had the genius idea of using the hollows to make molds of the people.

Pompeii today has been painstakingly restored, if not to its former glory, then at least to the point where its former charm and glory can be properly evocated.Despite how much reading material a Pompeii travel guide can offer you, none of the tourist attractions in Pompeii will take you more than 15 minutes to cover.

The best way to go about touring Pompeii is to get the guidebook published by Electa Napoli from the bookshop next to the ticket shop. This book will have its own mapthat carefully details your many stops – any other mode of Pompeii tourism is going to fall flat on its face.

Understand that while we’ve listed Pompeii as a city for the area it covers and it’s layout, it really is a single attraction, sort of an open air archaeological museum that you’ll need several hours to see completely.

Pompeii Tickets are as follows:

Plan Your Trip To pompeii

The best tours and activities in the city, guided by experts to give you a local insight to the best of Pompeii