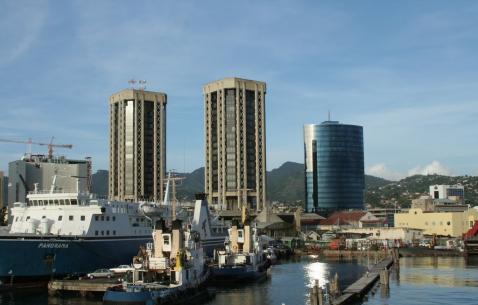 Big city lights set up against blue skies and the groovy vibe of the Caribbean region come together to form the ultra modern yet naturally picturesque city of Port of Spain, the capital of Trinidad and Tobago. This little twin-island nation’s capital is filled with tall buildings, high waterfalls and lush greenery that is home to an equally diverse group of local residents. Whether you’re a seeker adventure, pleased by luxurious pleasures, a hunter of historical tidbits and facts or just a wandering tourist who’d like to discover the essence and attractions of this popular island city, you’ll love Trinidad and Tobago as much as Trinidadian and Tobagonians love cricket!

The Port of Spain was founded near an ancient fishing village called Cumucurapo, and this is where early Spanish settlers created a port called "Puerto de los Hispanioles" and later "Puerto de España", thus resulting in its present day name. The area was covered in mangroves and heavy vegetation until the 16th and 17th centuries, when the Spanish created their first buildings in the area. They built open, mud plastered forts, which peppered the area and were positioned in between large silk cotton trees. Over time the area was developed by the Spanish, who also encouraged the settlement of French Catholics on the land, and over time the city’s population grew. Roads and buildings were built and used and as the city grew along with its inhabitants, Port of Spain soon became the capital of Trinidad and Tobago. In 1797, the British invaded the western part of the city and took over the land, renamed everything but kept the city as the country’s capital. During the Second World War, American soldiers hid upon reclaimed land in the city and these areas were later converted into a site for government buildings. Throughout the 19th and 20th century, the city grew in size and importance and today, it stands as one of the most important economic and financial cities in the region.

Today, the country is officially called ‘The Republic of Trinidad and Tobago’, and is home to 1.3 million people, and has the kind of ethnic diversity present in very few countries. The country is home to those descended from indentured labourers and others of East Indian origins, as well as those with ancestors from Africa, Europe, China and a number of other countries. Port of Spain is the country’s third largest city and acts as a retail and administrative centre for the islands, and is also home to two of the largest banks on the island. It’s also really important as far as trade is concerned, as it acts as a ‘container port’, with agricultural products and ready-to-sell goods exported from here. Bauxite and iron ore are trans-shipped through here as well. Besides being a centre for economic activities, the city is also a hub for political activities with the main seats of parliament located here. With all the business and economic activities going on, you’ll be pleased to know the people still find time to celebrate numerous wonderful festivals, like Carnival, play sports and revel in ‘liming’, which is the local word for ‘hanging out’.

Port of Spain is a beach side paradise combined with lush green, a buzzing city during the day that leads into a dreamy island with evenings full of calypso music and delicious food. That is the appeal of tourism in Port of Spain. It balances the beauty of Mother Nature with the progress of Father Time and creates a truly magnificent fusion of modernity and rustic charm.

Port of Spain is small but filled with so many people, so much culture and so many things to do that it’ll prove to be a wonderful destination for anyone and everyone visiting Trinidad and Tobago. Whether you’re on business or are vacationing, you’ll find something to keep you interested. With the sun in your eyes, chutney music in your ears and baked fish in your tummy, you’ll feel at ease and at peace in this stunning island get away so pack your bags and make your way to the Port of Spain for a truly multi-cultural holiday that will give you a Caribbean holiday with a modern twist.

Essential travel information and Port Of Spain tips for your visit