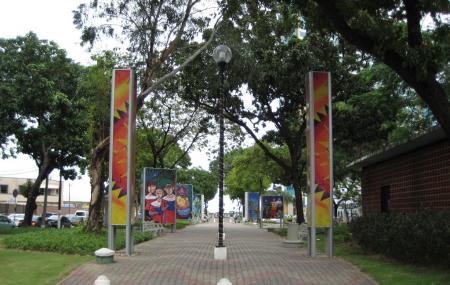 Brian Lara is one of the best cricketers of all time, having the highest individual score in first class cricket. He’s the only batsman to have scored a single, double, triple, quadruple and quintuple century during his career! He has yet another accolade to be proud of, this time hitting close to home: the Brian Lara promenade. Named in honour of the greatest batsman to have come out of Trinidad, this promenade is located in Independence Square and stands as a testament to one of Port of Spain’s favourite sons.

A 1970 plan outlining the construction of the city shows the blueprints for the promenade, and work began for the same only in 1993. Funding was procured from nearby banks and a year later, the promenade was extended and today it makes up the western portion of Independence Square, stretching from the Cipriani Statue to the Cathedral of the Immaculate Conception.

How to Reach Brian Lara Promenade

Love this? Explore the entire list of places to visit in Port Of Spain before you plan your trip.

Fancy a good night's sleep after a tiring day? Check out where to stay in Port Of Spain and book an accommodation of your choice.

94.26% of people prefer to travel by car while visiting Brian Lara Promenade