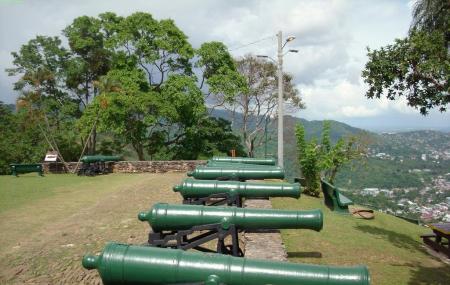 Sit upon a wooden bench and take in the stunning view of a misty, hazy Port of Spain, as dewy grass sprouts by your feet and ancient canons lie silenced beside you. Hills covered in green will accompany you as you look over the Gulf of Paria and stories hidden by the passage of time slink in secrecy all around you atop Fort George.

Formerly called ‘La Vigie’, the fort was created in 1804 and was the major defensive position of the island. Just 20 minutes away from capital city, the Fort was a series of ships and ramparts once upon a time, created to protect the island from pirates and other invaders. The Fort actually never saw any military battles during its functional lifetime and was used more often as a hiding place for precious belongings by the rich in times of revolt. In 1883, a Victorian styled signal station was built but ceased to operate by 1964, and the structure still stands today.

The drive the fort is narrow and winding and will take up an uphill road. Though the journey is little taxing, it’ll prove to be fun for the adventurous and the bird’s eye view from the top is truly worth the journey up.

How to Reach Fort George

Love this? Explore the entire list of places to visit in Port Of Spain before you plan your trip.

Fancy a good night's sleep after a tiring day? Check out where to stay in Port Of Spain and book an accommodation of your choice.