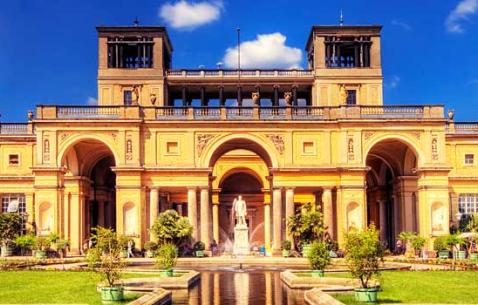 Potsdam carries a bit of the whole world- the Russian Quarters, Roman Baths, French Churches, the Chinese House and the Dutch Quarters are only a fraction of its growing cultures. Add to this the iconic historic sites, Royal palaces, English gardens, adorable trams and a nightlife that is second to none- and you discover there is more to the city than it ‘small town’ feel.

However you want to explore Potsdam, you truly cannot miss its vast Film history that put the city on the world map. Fun fact- the city was a major film production studio before the war (the Filmstudio Babelsberg being the oldest studio in the world!). Along with films, the music festivals, theater scene and Opera performances, all find a comfortable couch in the city and its prestigious venues.

For romantics, the Baroque architecture and beautiful buildings that date back to the 18th century, form the perfect breather to escape from the city life. The famous ‘Potsdam Palace Night’ recreates this era seamlessly and offers a dreamy experience.

Tourism in Potsdam is mainly as a day trip from Berlin but for avid travelers, a stay here has so much more to offer. In between the palace visits, gardens that are illuminated during festivals and busy markets that have a charm of its own, you are left with small hideaways in historic quarters, poignant memorials of the war, a mad mixture of museums and science and a unifying love of art, love and music.

Potsdam found its royal roots 300 years ago when Prussian King’s created their lavish homes here and even today, the town embraces its royal history and offers a tempting slice of it’s patronage to anyone who visits. For those who think Germany is defined by the world war, Potsdam is truly a breath of fresh air that promises to be a dreamy treat for all its visitors.

Essential travel information and Potsdam tips for your visit

Plan Your Trip To Potsdam

The best tours and activities in the city, guided by experts to give you a local insight to the best of Potsdam