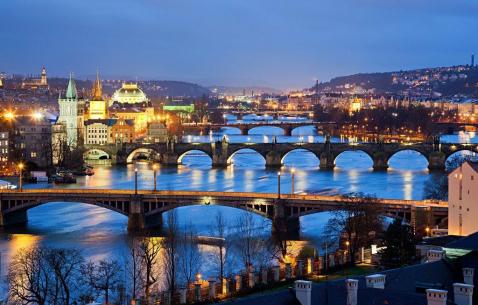 Prague (Capital of the Czech Republic) is a magical city crammed with amazing architecture, museums and art and intellectual pursuits. Tourist traveling to Prague city is enamoured by its breathtaking vistas, bridges along Vltava River with glorius staues, cathedrals, gold-tipped towers and church domes. Considered as one amongst cheapest cities to travel in Europe, it offers great panorama for shutterbugs. Prague is the best known city in the Czech Republic, it's a historic town and perfect for a weekend break, or as a base of operations to explore the rest of the country. Founded in late 9th century, Prague is a great bohemian destination which one should not miss in Europe.

People who visit Prague compare it to Paris in terms of beauty and culture. The city is beautifully located on both the banks of the Vltava River and for its townscape; the city is replete with burger houses and palaces punctuated by towers.The Historic Centre of this city delineates a supreme manifestation of Medieval urbanism. This city played a significant role in Europe as the architectural works of the Gothic Period (14th and 15th centuries), of the High Baroque, of the 1st half of the 18th century and of the rising modernism after the year 1900, influenced the development of Central Europe, perhaps even all European architecture. Prague represents one of the most prominent world centres of creative life in the field of urbanism and architecture that has transcended time and space.

Today, as you walk down the lanes of this splendid city, you shall come across cobblestone streets, gold-tipped spires, new galleries, cafes and modern clubs teeming with young Czechs. Due to its medieval skyline, the city is also known as the city of “hundred spires”. Due to its mystical and enticing character, the city has become one of Europe's hippiest travel destinations — a cosmopolitan city where culture buffs and pleasure seekers mingle happily in chic cafés and Gothic cathedrals. Each one of you should visit Prague at least once and experience all that it has to offer considering the best time to visit Prague.

Essential travel information and Prague tips for your visit

Plan Your Trip To Prague

The best tours and activities in the city, guided by experts to give you a local insight to the best of Prague