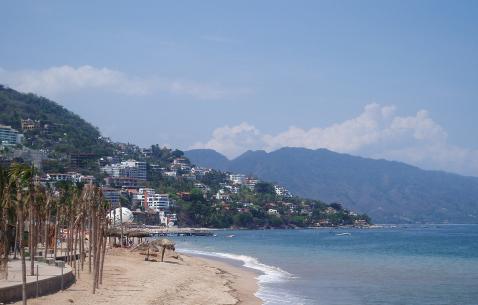 Nestled into the curve between the Bay of Banderas and the hilly jungles, Puerto Vallarta used to be a simple village once upon a time. Then Richard Burton starred in 'The Night of the Iguana', invited Elizabeth Taylor over, and the USA obsession with the celebrity couple launched village into tourism stratosphere. It's now the fifth largest city in the country, with a population of a quarter million.

The area has been settled since at least 600 BC, perhaps earlier. In the 16th century Cortes fought a huge battle with the Native Indians here, bringing the territory under Spanish control. In the 18th century, it began to function as a port for the nearby sierra towns. Mining operations in the 19th century gave it the final thrust of growth that led to it being made a municipality in 1918. Growth in agriculture in the nearby valley led to progressive modernisation. In the second half of the 20th century, tourist infrastructure was greatly developed, eventually establishing the city's reputation as a resort town.

For a tourist, the city is rich with both things to do and places to sightsee. The city is a popular LGBT tourism destination, dubbed the "San Francisco of Mexico."

Essential travel information and Puerto Vallarta tips for your visit

Plan Your Trip To puerto vallarta

The best tours and activities in the city, guided by experts to give you a local insight to the best of Puerto Vallarta