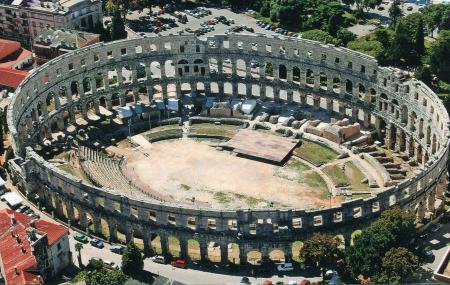 Find hotel near The Arena

An architectural masterpiece, an ancient roman amphitheatre and one of the largest surviving Roman arenas in the world. The arena is the most visited tourist destination in Pula. With reconstructions and addition happening for centuries, the arena is first believed to be built in between 27 BC-68 AD.

Considered as one of the best preserved monuments in the world, this aesthetically pleasing structure is built in limestone with the height of exterior walls being 96.5 feet. This four towered arena has 15 gates and series of underground passages. There were also fragrant water fountains in every tower and what now stands today as an amphitheatre was built in the reign of legendary Emperor Augustus.

The amphitheatre is the venue for the remarkable Pula film festival celebrating local as well as international films. With a seating capacity of around 3000, the arena is used as a stage for concerts, theatrical performances, Ice-hockey games and also in cinemas like the Shakespeare's revenge tragedy Titus Andronicus.

Entrance Ticket Details For The Arena

How to Reach The Arena

Love this? Explore the entire list of places to visit in Pula before you plan your trip.

Fancy a good night's sleep after a tiring day? Check out where to stay in Pula and book an accommodation of your choice.

71.97% of people prefer to travel by car while visiting The Arena

People normally club together Roman Amphitheatre and Dvojna Vrata while planning their visit to The Arena.

People also prefer to start their day with The Arena.