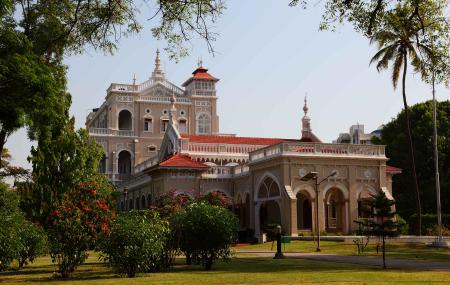 The Aga Khan Palace is one of the important monuments in Pune that gives you a glimpse into the freedom struggle of India. Located on the river Mula, it is a memorial dedicated to Mahatma Gandhi and his wife Kasturba Gandhi who were on house arrest here.

The Palace was built in 1852 by Imam Sultan Muhammad Shah Aga Khan III. The place became vital in the Independence movement when Gandhiji, his wife Kasturba and his secretary, Mahadev Desai stayed here after the Quit India movement in 1942.

It was later donated to the Indian people by Aga Khan IV to express his support for the Gandhian philosophy.

Aga Khan Palace has gained the status of an international place of a pilgrim as thousands of people swarm this place to pay their homage to the Father of the Nation. Kasturbaji and Mahadev Desai passed away while their time in this Palace and the place holds their Samadhis. Gandhi’s ashes are also stored here.

The Palace built according to Italian structure also has a well maintained sprawling garden. A picture gallery and museum that display Freedom struggle and Gandhi’s contribution are some of the attractions of this place.

Every national holiday is celebrated with different activities here. A visit to the Aga Khan palace is worth your time as it is considered as one of the greatest marvels of India.

How to Reach Aga Khan Palace

Love this? Explore the entire list of places to visit in Pune before you plan your trip.

Fancy a good night's sleep after a tiring day? Check out where to stay in Pune and book an accommodation of your choice.

91.03% of people prefer to travel by car while visiting Aga Khan Palace