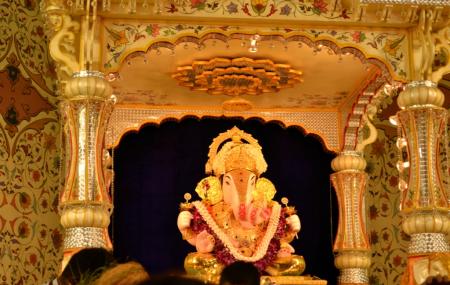 The Dagdusheth Halwai Ganapati sits in the heart of Pune amidst the heavy traffic and bustling peths. When you enter the temple, loud chants of ‘Ganapati Bappa Morya’ engulf you and your eyes fall on the beautiful Dagdusheth idol in the main Mandap. You can’t help but marvel how beautiful the gold-laden Maharashtrian deity is.

The temple was built by Dagdusheth Gadve in memory of his late son. Gadve, a Halwai (Sweet maker) was a devotee of Lord Ganesha and built this temple in his ancestral building in Budhwar Peth.

He also formed the ‘The Shreemant Dagdusheth Halwai Sarvajanik Ganpati Trust’. It is one of the richest religious trusts in the country. Along with the temple administration, the trust does a lot of philanthropic work. It runs an orphanage, an old age home, and ambulance services for the poor.

The temple is also notable for popularizing the Ganeshostav. DagduSheth Halwai temple does a lot of constructive work unlike many Ganesh Mandals, who play loud music and ignore the vision that Lokmany Tilak had for the Ganesh Festival.

A grand procession is carried out on the Anand Chaturdashi with the Lord placed in a decorated chariot. Traditional Dhol and Tashe fill the atmosphere with a devotional enthusiasm.

A visit to Pune is incomplete without visiting the Dagdusheth Mandir. It is the pride of Pune. Many Punekars start their day by bowing down to their beloved god. The temple welcomes people of all faith and soothes every chaotic soul that comes in search of some peace.

During the Ganesh festival that is held for ten days, it lightens up with artistic creations that start three months prior to the festival. It is swarmed with visitors during this time and is the best time to visit the temple in its full glory.

How to Reach Dagdusheth Ganpati

Love this? Explore the entire list of places to visit in Pune before you plan your trip.

Fancy a good night's sleep after a tiring day? Check out where to stay in Pune and book an accommodation of your choice.

51.4% of people prefer to travel by car while visiting Dagdusheth Ganpati

People normally club together Shaniwar Wada and Laxmi Road while planning their visit to Dagdusheth Ganpati.