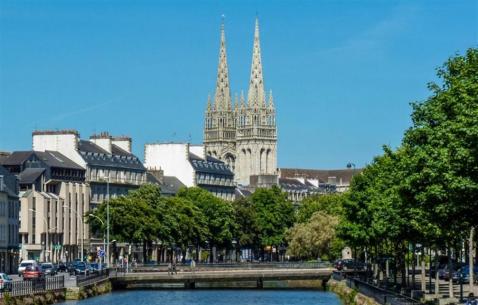 Nestled on the juncture of the Rivers Steir and Odet, Quimper is the capital of Finistere department in the Brittany region of North-western France. The city is Brittany’s cultural heart, and is rich with Breton and Celtic heritage. Quimper’s historical significance and lively spirit put it on many vacation itinerary planners.

The earliest settlements in the region originally date back to the Roman era. By 495AD, Quimper fell under the jurisdiction of Bishop. It later went on to become the capital of La Cornouaille, the most traditional region in Brittany. In 11th century, Quimper was united with the Duchy of Brittany. The town was destroyed during the civil wars of 14th century; and the Duchy was finally passed onto the House of Montfort in 1364.

Quimper has a rustic feel to it with long footbridges stretching over the rivers, pedestrianized streets with half-timbered houses, ancient cathedrals and other thirteenth century Gothic structures.

In addition to various sightseeing places, Quimper is famous for its pottery, which goes by the name Quimper faience. The city takes pride in its copper and bronze works, ironware, leather, woollen and paper goods.

Quimper might be the best place to be on your vacation planners for a laid back holiday. Explore this beautiful city by visiting the attractions, taking a leisurely stroll on the beaches and the cobbled alleyways. Head out to the local cafes or restaurants in the evenings and treat yourself to a nice local meal with their special cider.