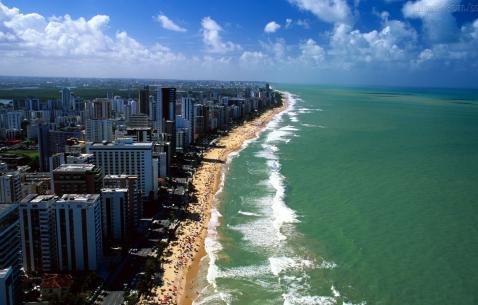 Recife gets its name from the ancient underwater reef that protects its shore. In the 16th century, Recife was only a collection of fishing shacks. With the arrival of the Franciscans, and then Jews, the significance of the city began to expand steadily. The city’s growth is closely tied to the growth of the nearby town of Olinda, which has now been declared a UNESCO World Heritage Site.

Touristically, the city is famous for its Old Town, the spectacular Boa Viagem beach, the unrelenting arts and culture scene, vibrant nightlife and two iconic museums. There are many great churches, and also the America’s first Jewish synagogue. The museums all have excellent exhibitions – detailed, well-presented, and thoughtfully laid out.

Aside from three major parks, there’s not much to be done in terms of green spaces. The theatre scene is quite active. Shopping is great too, especially the souvenir kind. Food wise, Pernambuco state’s cuisine is distinct from the rest of Brazil thanks to its greater African and indigenous influence. Beach food is practically its own sub-culture, with an endless number of vendors serving the Boa Viagem beach. The Boa Viagem district also has many great bars, pubs, and nightclubs, which the local young crowd is crazy for.

There are a number of tourist attractions for sightseeing around the city too. For example, Itamaraca Island and Coroa do Aviao islet; Porto de Galinhas, the best beach in the state; Igarassu, the location of Brazil’s oldest church and some great artwork; and the Sao Benedito do Sul waterfalls. Off the shores, there are over 100 shipwrecks to dive to.

Essential travel information and Recife tips for your visit

Plan Your Trip To Recife

The best tours and activities in the city, guided by experts to give you a local insight to the best of Recife