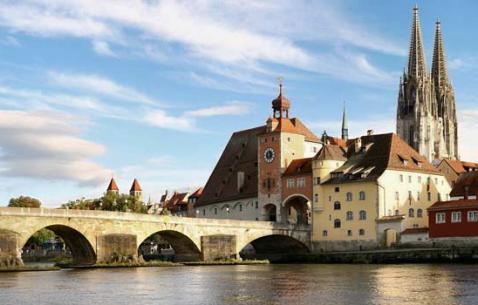 Regensburg claims to be one of the oldest cities of Germany with its medieval history well preserved and cherished. Strewn with historical sites such as the churches, patrician mansions, towers, and Roman walls, the city exhibits its 2000 years old heritage. This is also one of those few cities which have survived the destruction from Allied bombs in World War II. Unlike most of other European cities where the historical monuments are actually the replicas of their pre- war state, Regensburg’s monuments reflect historicity in its unscathed form. Meander through its medieval streets in the Old Town and you shall encounter countless Roman and Gothic edifices of past peeping through the modern cafes and restaurants. Stand at its Stone Bridge and admire the beauty of the city against the backdrop of Danube River.

Situated on the most northerly point of the famous Danube River, the city has served as an important trade and cultural centre in the past. With the largest harbour in Bavaria region, the city today boasts of being a popular river cruise destination from where you can begin your excursions on ships that sail around the local waterways and even beyond.

Today, the city claims to own a famous university which dominates its cultural and entertainment galore.

Essential travel information and Regensburg tips for your visit

Plan Your Trip To Regensburg

The best tours and activities in the city, guided by experts to give you a local insight to the best of Regensburg