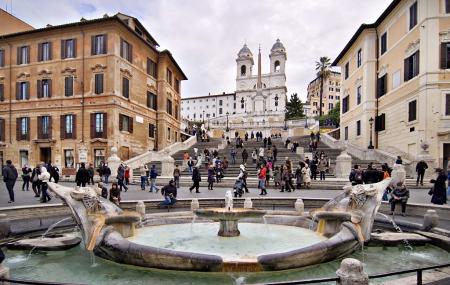 The Spanish Steps is a set of long and winding staircase that is located at the foot of the Piazza Trinità dei Monti. These steps are in close proximity to the Piazza di Spagna and people can reach the Trinità dei Monti church upon climbing the entirety of the staircase.

This structure consists of one hundred and thirty five steps and was constructed between 1723 and 1725. The original aim of the staircase was to link the Bourbon Spanish Embassy to the aforementioned church which was at that time patronized by the Bourbon Kings.

These stairs have been prominently featured in media; especially in films such as Roman Holiday, The Roman Spring of Mrs. Stone and others in addition to being referenced to in numerous popular songs. Today, these steps remain crowded most of the time with people soaking in the architecture and heritage. Visit Italy Itinerary 10 Days for an unforgettable Italy travel experience.

How to Reach Spanish Steps

Love this? Explore the entire list of places to visit in Rome before you plan your trip.

Fancy a good night's sleep after a tiring day? Check out where to stay in Rome and book an accommodation of your choice.

53.91% of people prefer walking in order to reach Spanish Steps

People normally club together Trevi Fountain and Piazza Navona while planning their visit to Spanish Steps.