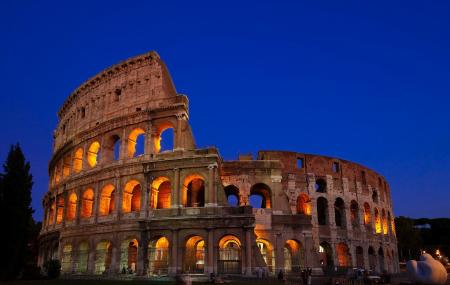 The centre of the city of Rome is where the Colosseum makes its majestic presence felt. Constructed over a period of 100 years beginning from about 70 to 80 AD, this stone and concrete amphitheatre was commissioned by Emperor Vespasian and was completed by his successor to the throne.

A marvel of human ingenuity in architecture and engineering, the Coliseum has today overcome its bloody and gruesome history to bear testimony to the timeless appeal of Roman architecture and the grandeur of the empire. Early uses of the amphitheater included dramas, gladiator battles, public spectacles, executions, animal hunts and other vicious forms of entertainment.

Later on however, the Coliseum became closely associated to the Catholic Church and to this day, it remains as the location for the torch lit “Way of the Cross” processions around the premises, led by the Pope every year on Good Friday.

How to Reach Colosseum

Love this? Explore the entire list of places to visit in Rome before you plan your trip.

Fancy a good night's sleep after a tiring day? Check out where to stay in Rome and book an accommodation of your choice.

65.85% of people prefer to travel by car while visiting Colosseum

People normally club together Roman Forum and Ruins Of The Palatine Hill while planning their visit to Colosseum.

People also prefer to start their day with Colosseum.