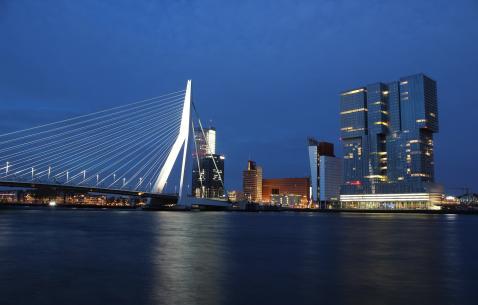 Rotterdam’s ever growing skyscrapers spin an urban story like no other place in Netherland. The history of the city dates back to the 13th century when early settlers took refuge near a dam built here on the Rotte river. With time, its beauty - the riverside view, a craze for growing more efficiently than any other city in the country, its rich history from the medieval times to the World War II and a Port which is now the largest one in Europe, all sums up to form an exquisite weave that is Rotterdam.

Post the World War II or the Rotterdam Blitz, the city truly found its foothold and soon its architectural marvels were added to the city scape by some of the best architects including Rem Koolhaas and Ben van Berkel among others.

Rotterdam has a high population of foreigners and is perhaps the only city in the country where you can distinctly see world influences. The city’s active nightlife, hustling shopping pulse and its culture and art is something anyone can enjoy. The crowd-puller however, is their long list of larger-than-life festivals including the Summer Carnival and the popular North Sea Jazz festival. Festivals like these is Rotterdam’s way to compete with the ever-bustling Amsterdam.

Add to that mix a good collection of museums with its intriguing history and you have a vacation which is simply Rotterdam on a platter!

If there is anything that Rotterdam takes more seriously than its culture, it is its sport life. The city is nicknamed as the ‘City of Sports’ with a healthy dose of Football, Tennis, Field Hockey, Swimming, Boxing and Baseball tournaments added to its yearlong charm. Tourism has flourished in Rotterdam owing to its multi-dimensional culture, heritage and ultra-modern spaces and events.

If you are looking for a place which can offer a piece of everything, Rotterdam will map out a perfect sojourn for any curious traveler.

Essential travel information and Rotterdam tips for your visit

The best tours and activities in the city, guided by experts to give you a local insight to the best of Rotterdam