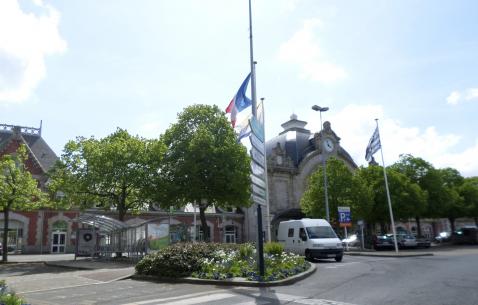 A city located on the Bay of St. Brieuc by the English Channel, Saint-Brieuc is a commune and the administrative capital of Côtes-d'Armor departement of Brittany region in the Northwest of France. With its serene beaches, picturesque lands and several natural wonders, Saint-Brieuc remains on the itinerary planners of people visiting Brittany and other close by regions.

Saint-Brieuc got its name from Brioc, a Welsh monk who established an Oratory in the region during the 6th century. Pays de Saint Brieuc, one among the nine traditional bishoprics of Brittany was named after this place. It was originally found by Brittany’s Duke Arthur II as one of his administrative regions.

The tourism of Saint-Brieuc might not be flooded with the historical or cultural buildings and monuments. But the city’s itineraries involve abundance of natural wealth like the quaint beaches, scenic landscapes and the beauty of Goued and the Gouedig Rivers that flow through St. Brieuc. Further, the city possesses a remarkable bay which is said to have the fifth highest tides in the world.

Apart from the number of places to visit around and the unique countryside atmosphere, the city is known for its university and a rich industrial history. This made St. Brieuc the centre of Dynamic economy in the Northern Brittany. The city is also home to Les Champs, a shopping area in the heart of the town that has about 27 retail outlets.

While touring around the Brittany region, do not forget to add Saint-Brieuc to your vacation planners. While you’re at the town, visit the tourist information centre and get some maps and other details about the place. Take a stroll along the Promenades of the Rivers and the Bay, indulge yourself in some shopping and other activities to do at the Les Champs, and last but not the least, nibble on some of their delicacies at the local restaurants.