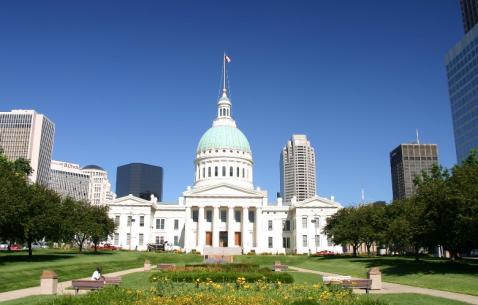 Want to tuck into a plate of juicy, succulent barbecue pork steak while watching a baseball match? Or how about slinking through a series of tunnels spread out over four floors of a skyscraper? From Blues festivals to blooming blossoms, from outdoor art exhibitions to the Pulitzer Foundation for the Arts, Saint Louis is a large city with a strong, beautiful personality that has grown as a result of a rich past, a plethora of local pioneers and an influx of diverse cultures within the city limits. Vacation planners will have their hands full plumbing the depths of this city.

Historically, the area that later became the city was the centre of a Native American Mississippian culture, and St. Louis tourism is very cognizant of this fact. The Natives were known for the earthwork mounds, which lent the city’s early nickname ‘The City of Mounds’, and lived in the area from as early as 900 A.D. In 1673, came French explorers Louis Jolliet and Jacques Marquette and soon French settlements were set up. After France lost to the British in North America, Pierre Laclède and his stepson Auguste Chouteau founded the city of St. Louis. The city actually got its name after King Louis IX. St. Louis was transferred to the Republic of France in 1800 and then sold to the United States three years later, as part of the Louisiana Purchase. Soon steamboats arrived to St. Louis, as did many new races of immigrants. Immigrants from Africa, Ireland and Germany and after 1860, the population was up to 160,000.

Saint Louis, nicknamed ‘The Gateway to the West’, was the last major stop pioneers ventured westward to the Pacific coast. The stunning, soaring Gateway Arch was built to commemorate this. Saint Louis has played a significant role in the country in numerous ways, both in the past and in contemporary times. It has hosted the 1904 World Fair and the 1904 Summer Olympics, being the first non-European city to do so. The city has also made contributions to the culinary world, at both a national and global level. It was at the World Fair where the ice-cream cone, the hot dog, iced-tea, cotton candy and the hamburger were introduced to the masses

Today, the city is the largest of the former French-Louisiana territory the largest metropolitan area in Missouri. In 1876, the city of St. Louis gained independence from the county of St. Louis and though they share the same moniker, they are divided into two districts, with the city attracting more tourists due to its bustling business centers. The city was very well planned, thanks to which visitors will appreciate the beautifully paved roads with lots of green spaces. Before its founding, the area was mostly open space and lusciously green prairie land and the city planners made it a point to conserve the indigenous plant and tree life in area by filling the city with oak, maple and hickory.

Since the city has become a popular tourist destination, there’s really something for everyone to do. From exciting museums where you get to climb around walls and touch the exhibits to celebrating special events under the magnificent city Arch, no one can possible get bored here. Special St. Louis food coupled with the sights, sounds and feel of the city is enough to make anyone feel energized, revitalized and entertained for hours upon hours. Visit Saint Louis, sink your teeth into a warm, toasty slinger with mashed potatoes, crack open an ice-cold Budweiser, watch the fireworks explore over the arch, painting the night sky and let the city slip you some sweet, old, southern styled loving. Each one of you should visit Saint Louis at least once and experience all that it has to offer considering the best time to visit Saint Louis.

Essential travel information and Saint Louis tips for your visit