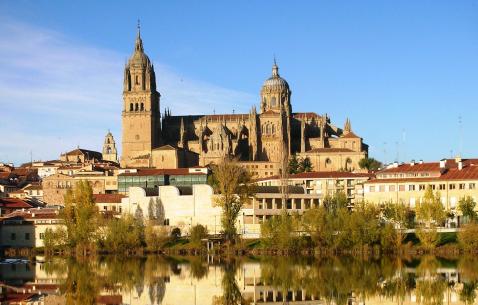 Situated in the northwestern part of Spain, Salamanca is filled with historical monuments built in Renaissance style of architecture. The whole city is covered by monuments made of sandstone. So, when the sun sets, the stones glitter like gold and orange, making Salamanca look like a golden city hence the  name ‘La Dorada’ (meaning: the golden city). At the same time, the city has been declared “World Heritage Site” by UNESCO. This in return has positively influenced the tourism industry of this city. Another striking feature of the city is the night life. If you wish to taste the real flavor of Spanish culture and its nightlife, Salamanca is the ultimate destination. The city experiences vibrant nightlife because of the thousands of students and scholars who come from all over the country to study in the University of Salamanca (oldest university of Spain and one of the oldest universities of Europe).

However, in the past the city was not easily accessible because of its location. With the development of the airport in Valladolid, Salamanca can be reached with just one hour drive from the airport.

According to Triphobo guide, Salamanca is the destination that lets you enjoy the true color of Spain.

Essential travel information and Salamanca tips for your visit

The best tours and activities in the city, guided by experts to give you a local insight to the best of Salamanca