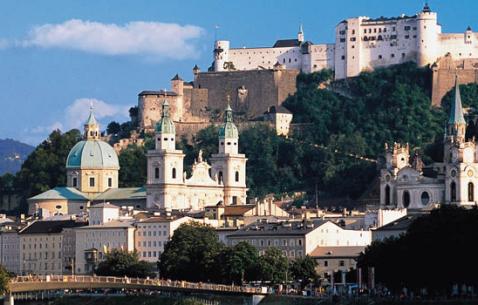 Salzburg is one of the largest cities in Austria and the capital of the federal state of Salzburg. The alpine surrounding, rich history, musical roots, magnificent architecture and vibrant culture is what that makes Salzburg one of the top travel destinations in the world. The traces of the first human settlement in the area date back to the Neolithic age. The city was under the rule of the Roman empire around 15 B.C. and for the next 500 years, trade, commerce, culture and infrastructure was developed under the romans. By the time middle ages arrived, the city had transformed into a religious stronghold of the Christians. The word Salzburg means "salt castle", referring to its massive fortress and the white gold that is derived from the mountains in the South. The area was officially called Salzburg in 755 A.D. Today, Salzburg is internationally renowned for its baroque architecture, historic sites, international universities, stunning museums and galleries, salt mines, musical history, lavish churches, magnificent palaces, pure Alpine mountains, lively festivals, exciting events, delicious cuisine, shopping opportunities, naturals sights and a vibrant culture preserved in its rich history. The city was listed as a UNESCO World Heritage Site in 1997 and was the birthplace of the legendary 18th century composer Wolfgang Amadeus Mozart. the city was the setting for the musical play and film The Sound of Music in the mid-20th century. The scenic beauty, fascinating cultural and artistic heritage are the essence of Salzburg making it one of the most sought after travel destinations in the world.

Plan Your Trip To Salzburg

The best tours and activities in the city, guided by experts to give you a local insight to the best of Salzburg