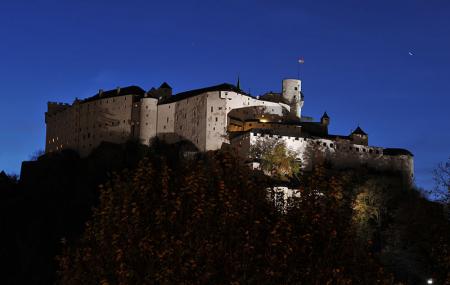 Sitting atop a small mountain, glaring down at the city, the Salzburg Fortress is a place of beauty with a rich past. Gradually enlarged over centuries, the 250 meter long and 150 meter wide fortress is the largest preserved medieval fortress in the whole of Europe. The austere looking exterior hides sumptuous state rooms within, along with a torture chamber and a marionette museum! Today, the fortress has become popular amongst travelers due its history, architecture and the activities available here. Like many places in the country, it looks like an apparition straight out of a story book.

Founded in 1077, the fortress was build to protect the interests of the city’s archbishops. The only time it came under attack was in 1525, during the German Peasants’ War. In 1612 the deposed Archbishop died there, imprisoned. During the Thirty Years’ War, various parts of the fortress were added such as its gunpowder stores and gatehouses. It was later used as a storage depot and dungeon was abandoned as a military outpost in 1861. Post the 19th century, the fortress was refurbished and became a popular tourist attraction. A cable car was attached, leading from the town into the castle. During the 20th century, it was a prison, holding Italian POW’s and Nazi Activists within its belly. In recent times, it has appeared on a commemorative coin and the 900th issue of the Austrian Mint magazine.

Inside the fortress lies numerous rooms, some beautiful and some macabre. There is the splendid Golden Room and the Burgmuseum, which holds a lovely collection of art. The Rainers museum is full of arms, armour and ammunition from medieval time. There’s even a torture chamber, filled with the most spine tingling devices from that age, though they were used in a different castle and are just stored here. Close to this chamber, is an exquisite chapel built in Gothic style. A 200 pipe organ, nicknamed ‘The Bull’, is played daily during the warmer months, and its music reverberates throughout the establishment. If you climb up to the lookout post, you will see a stunning view of Salzburg. Some of the rooms hold special exhibitions, including a marionette museum, which will prove to be an enchanting preview to the Welt Der Marionetten, which is close by.

Visitors can visit the fortress by walking up the foot path or they can take the Festungsbahn (the cable car), the latter being more advisable for the elderly and those with small children. You can treat yourself to pastry and coffee in the dungeon!

Warning: But if you go don't linger afterwards. The lift is only open for one or two trips down. We chose to walk down and being dress up for the concert that was difficult. The road within the fortress goes straight down and it is very slick clay. Nice walk, but not if you are in heals or do not have any traction on your shoes.

Given price is for basic ticket for adults.

How to Reach Fortress Hohensalzburg

Love this? Explore the entire list of places to visit in Salzburg before you plan your trip.

Fancy a good night's sleep after a tiring day? Check out where to stay in Salzburg and book an accommodation of your choice.

56.9% of people prefer to travel by car while visiting Fortress Hohensalzburg

People normally club together Petersfriedhof and Nonnberg Abbey while planning their visit to Fortress Hohensalzburg.